Can ESG be saved? Only if it radically changes its definition of “governance”

Mark Goyder is a senior advisor to the Board Intelligence Think Tank. He’s the founder of Tomorrow’s Company and co-author with Ong Boon Hwee of Entrusted: Stewardship for Responsible Wealth Creation.

On holiday in Italy recently, I got talking to Mario, a wine enthusiast. We discussed an outstanding white wine which came from a small vineyard nearby. The vineyard had been winning awards for several years. Until this year when it won nothing. One of its major buyers had insisted that it fulfil the requirements that go with being a Vino Biologico (Organic Wine).

Without some of the pesticides used previously, the wine’s award-winning taste had suffered. What’s more, said Mario there were so many forms to fill in that the vineyard just had to employ an extra person just to keep up with the paperwork! Complying with a responsibility standard had its costs — disproportionately so for those who started and ran smaller businesses. And there are no compensating rewards for being a small, local business, rooted in the community.

I remembered this conversation as I caught up with the latest ESG developments in North America. According to research by Cognito, media coverage of ESG is increasing by 50% every year. And yet, as I argued a year ago, my fear is that, unlike organic wine, ESG has never been defined. Everyone can project their own meaning onto it. If a concept is ill-defined, it can degenerate into a label. This exposes it to political attack.

“I’m old enough to remember when liberals accused big business of consistently being on the side of Republicans,” former Vice President Mike Pence wrote in a May op-ed in the Wall Street Journal. “But in 2022 the woke left is poised to conquer corporate America and has set in motion a strategy to enforce their radical environmental and social agenda on publicly traded corporations.”

How has ESG allowed itself to become this kind of political football? The answer is simple. It hasn’t become a recognised framework by which all investors assess companies. It means different things to different people.

Speaking last week at an Initiatives for Change event which (virtually) gathered people from different European countries including the UK, I asked them to offer their own definition of ESG. 21 of the 60 people obliged. Of the 21 definitions given, only three of them mentioned investors.

This took me back to 2003. In that year Tomorrow’s Company published Redefining CSR, expressing unease about the apparent, and perhaps too easy, victory of Corporate Social Responsibility (CSR). This suggested that CSR might have two different definitions. One, “Compliance” CSR:

“A process by which companies are required by social pressures to comply with a widening range of social expectations. If all companies were to subscribe to this view, CSR would become like a fashion parade, where companies would win applause for wearing the right clothes and saying the right things in their reports . . . and CSR would be well isolated from “real” business activity.

The other, “Conviction” CSR:

“The expression of a company’s purpose and values in all its relationships. If all companies were to subscribe to this view, there would be . . . a marketplace in corporate personality, in which companies would tell society what they stood for and what they aimed to contribute . . . inviting stakeholders to examine how effectively they had acted on these intentions and lived up to their own corporate values.

Here I see a historical parallel.

I had worried in 2003 that CSR would become like a fashion parade and be well isolated from “real” business activity.

Can we save ESG from becoming a political football?

We can only save ESG from being a political football if we reconnect it to a coherent concept of wealth creation.

Robert Eccles has been one of the pioneers of ESG and the rigorous reporting that it needs to make it credible. In a 2019 paper, Eccles and colleagues remind us that ESG has always had two major strands.

One is the tradition represented by initiatives like the Global Reporting Initiative. This reflects society’s concerns about the impact of companies. The other derives from professional and institutional investors who have recognised that ESG factors will affect investment performance.

In this and later writing, Eccles worries that it is this perspective that he rightly says needs reasserting if ESG is not to be shouted down.

This gets us into the necessary reassessment of ESG. My main criticism of the ESG methodology is that it does not start with the purpose, values, and leadership of a company. It does not assess a company’s character. It is not based upon a robust theory of wealth creation — how companies are started by entrepreneurs; how they develop; how they are motivated; whether they change their character as they bring in external finance. The only corner of the ESG triangle where these fundamental questions might belong would be the “G” — governance. 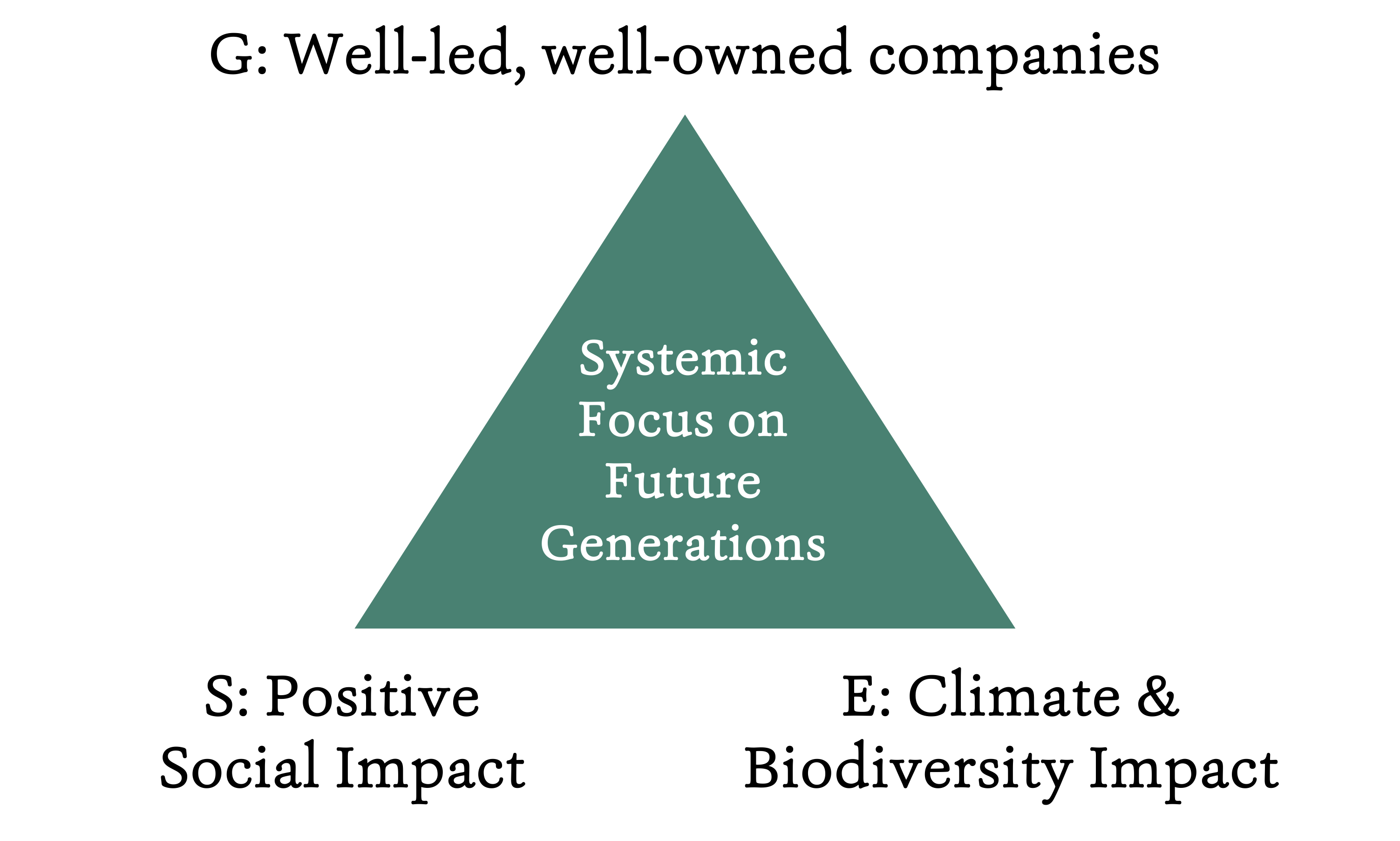 “The PRI works with investors to address governance issues affecting the companies they invest in, such as tax fairness, responsible political engagement and executive pay.”

These are significant issues which may tell us a lot about a company. They do not, however, begin to give us a basis for assessing a company’s character — its purpose, its values, its approach to key relationships, its trustworthiness. And without this how can we judge the claims made by companies in their sophisticated reports?

ESG is a bundle of three parallel tracks of analysis that its exponents have struggled to integrate. It needs to be re-conceived as a pyramid. At the top would be a new and extended analysis of the stewardship and governance of a company. Only once companies had passed this filter would they be considered for their claims to have positive social or environmental impacts. Call it governance by all means. But make it a real due diligence on the character of a company.

What if the Chancellor were an Anthropist?

Tim Ward on organisational agility: “Governance itself doesn’t do anything, but it allows people to be their best.”

Tim Ward is the former CEO of the Quoted…
Latest

Echoes of a Better Future

A reflection on the Anthropy conference 2023