The Madness, Let Alone Unfairness, of US Executive Pay

The Sense of Fairness blog is an initiative by investor Paul Lee, which seeks to understand some of the underlying causes of our inequality crisis and the challenges that arise from it, as well as using fairness as a lens to consider some of the broader issues that face the corporate and investor worlds.

A billionaire investor rails at the suggestion that someone earning $99 million is paid inappropriately, complaining that in some way the system for raising concerns must be fixed. It’s an article that could probably only appear in one of our financial markets-focused newspapers — in this case, it was the FT.

The complaint from Michael Moritz, partner at technology investor Sequoia Capital, is still odder because what it frets about is that 36% of Apple’s shareholders voted against what is usually called the say-on-pay vote. Formally, this is called an “Advisory vote to approve executive compensation”, and the word “advisory” matters more than the word “approve”. Even if a majority of shareholders had opposed the vote, Tim Cook, Apple’s CEO, would still have been paid: such a vote would have amounted only to a slap on the wrists. A vote against by a minority of the shareholder base amounts to even less than such a slap on the wrists.

And yet Moritz feels this is evidence that the system is broken. While this blogger agrees that the US pay system is indeed broken, that’s from a very different perspective.

The brokenness of the US pay system is shown very clearly in these statistics from the 2022 version of the 100 Most Overpaid CEOs, the 8th edition of an excoriating report from ethical campaigners As You Sow:

Average CEO pay in the US is $15 million each year, though as the table shows many are paid much more than this. On average that is almost 300× the pay of that company’s workforce, though as the data also shows, at many companies the CEOs earn thousands of times more than their average worker. Indeed, the only times that the ratio appears to drop below 300× are where that company’s median employee earns over $100,000, which is rare as average pay in the US is around half that, and probably reflects a narrow understanding of the company’s workforce. In general, US CEOs are taking a disproportionate level of pay, and leaving their colleagues with unfairly low amounts.

Thus, the stagnation of the pay of ordinary people makes these numbers appear still more extreme. As well as excess pay at the top, these disparities are being driven by the average worker’s salary falling in real terms as ordinary jobs are squeezed from our system and the middle class is hollowed out. That reduces people’s ability to consume and so is a drag on our economies — something that ought to matter to broad-based investors. Of course, this economic drag is in addition to the way that unfairness both blights lives and shortens them.

But broad-based investors are not yet responding to the harm caused to their investments by these inequalities and unfairness. It’s hard not to see a reason for this US excess pay lying in some way in the following chart, also from the 100 Most Overpaid CEOs report. In effect, some of the world’s largest investors, particularly those based in the US, are endorsing this manifest unfairness: 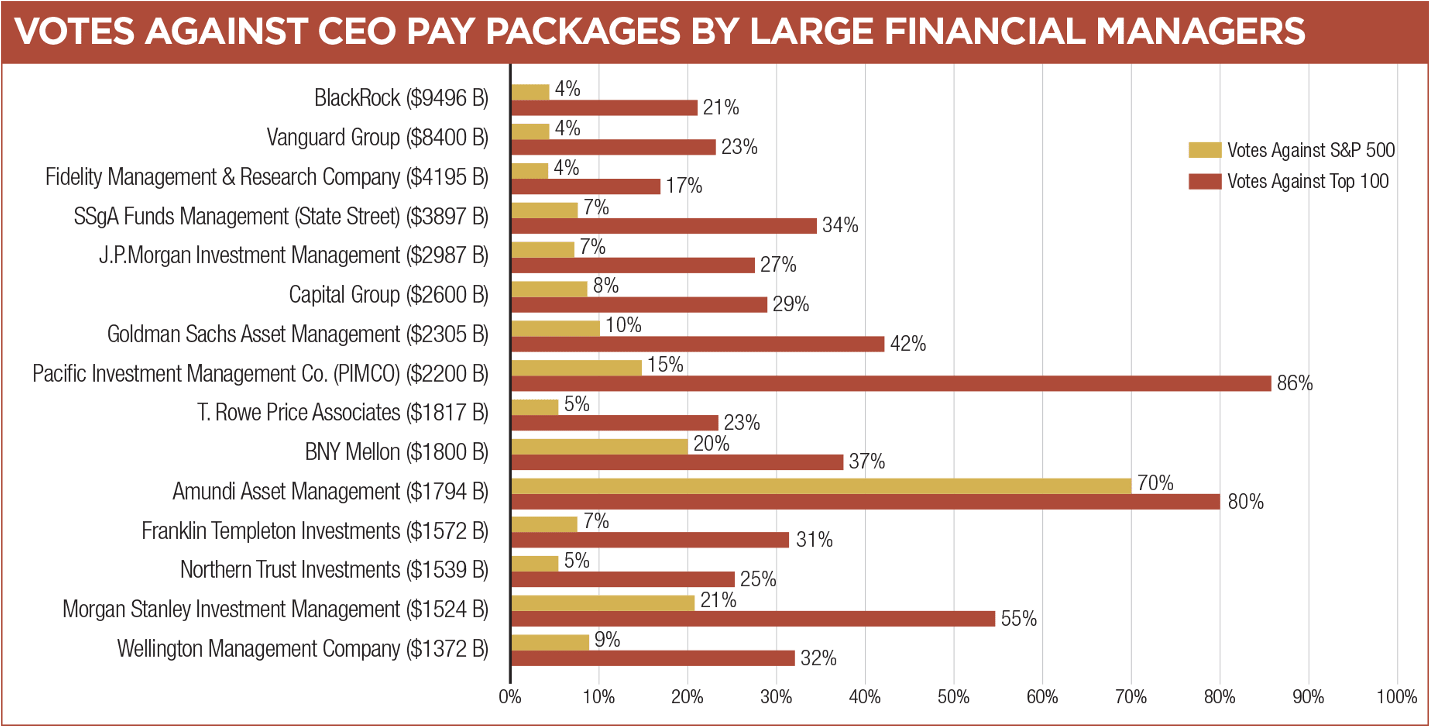 At the other extreme of this table are some of the European investors who now oppose the bulk of US pay resolutions. Some I have directly influenced to take such tougher lines. I personally found it wasn’t hard to design a policy on pay voting that led exactly to broad opposition to US pay: if you oppose so-called “long-term” schemes that start paying out in less than three years, schemes that pay out for performance that is below average, or where there is no performance element, you find yourself opposing pay at the majority of US companies. It’s odd: none of these expectations seems very much to ask, and most of them are stiffly enforced by investors in various markets outside the US (including those same institutions which seem so weak in the US market), and yet different rules seem to be applied by many to US companies. That result of opposing most pay votes in the US held true even before I added a view about a maximum level of pay in any single year.

While the majority face pay stagnation and precarious work, a few enjoy untold riches. Pioneer activist investor and campaigner Bob Monks has noted the insanity of this: in effect, it means that a few years of work by some individuals can earn them enough that their children’s children need never work. That’s hardly reflective of the American Dream.

Instead of being concerned about these manifest unfairnesses, billionaire Moritz argues that the Apple vote is evidence that ISS and Glass Lewis — the world’s leading advisers to institutional investors on how they might choose to approach voting matters — are acting as both judge and jury. Their recommendations against the resolution were the determining factor for how the votes fell, he suggests.

This is nonsense. I’m no apologist for ISS and Glass Lewis. I took the services of both over the years and had multiple disagreements with each; ISS in particular has been poor at handling conflicts of interest, and it does have far too dominant a position in so-called proxy advice (its market share is usually estimated at around 80%). Yet to suggest 34% of shareholders at Apple had abdicated their responsibility to take a decision and just leant entirely on the advisers’ recommendations is simply wrong.

Let’s be honest: investors do on occasions lean very heavily on ISS and Glass Lewis, or their other voting advisor(s) of choice. That is particularly true when faced by the height of the voting season (which Apple’s meeting preceded but we are just about to enter), when for many investors there will be dozens of meetings to be voted every day, and it is particularly true also of the long tail of small investments in small companies that many institutions have. But to imagine that it’s true in relation to votes at the largest company in the world at a time out of sync from the broader voting season is unrealistic.

ISS and Glass Lewis are not judge and jury. Usually, their work amounts to a judge’s summing up of the evidence, and the shareholders themselves act as the jury (though with no obligation to reach consensus, let alone unanimity). The simple evidence of the votes on the various shareholder resolutions at the Apple AGM shows this: ISS recommended that investors should vote in favour of five such shareholder proposals and yet the votes in favour of these varied from 31.7% for to 53.6% for. The last, calling for a civil rights audit, reflects broadly held concerns about allegations of Apple’s mistreatment of black employees, and its apparent racial unfairness.

There were good reasons to oppose the Apple executive pay vote. Among them were: not only is Cook’s share award of $75 million extraordinary, his pay generally is generously above that of peers; though the share award is said to cover a 10 year period Cook is permitted to keep it if he retires ahead of that, and at 61 he is already allowed to retire (to be fair, he forfeits it if he retires within a year of the award); and the vote covers other executives too, who each received pay identical to each other — suggesting that there is no rigorous assessment of performance involved in their awards at all. Let’s not get into the generous perks that sit on top of the generous pay, such as Cook’s extensive use of an executive jet for personal purposes, estimated to be worth $700,000 in the year.

The reasons to oppose the pay vote hold true even though as Moritz notes Apple’s valuation has risen from $360 billion to $2.4 trillion over Cook’s tenure. As well as sound management, there are some other small reasons for this rise, not least the pumping up of share prices generally because of quantitative easing by the world’s central banks, and the technology tailwind from the pandemic. Cook was awarded 100 million shares when he took over the job in 2011, then valued at around $370 million and now worth billions. Some might suggest he has already been well-compensated for his stewardship of the business. Others will note that the value creation that there has undoubtedly been is not down to one individual but to a broader workforce, including those within the Apple supply chain.

It’s also a dangerous game to suggest that executive pay should be driven purely or mainly by share price valuations from time to time. At the time of writing, Apple’s share price is down around 10% this year. I’m sure Michael Moritz would not suggest that Tim Cook should be paying money back to the company.

US executive pay truly is insane, and billionaires may not be the best persons to judge what is fair and unfair in respect of it.

Most of the coverage of the Nadhim Zahawi story…
Latest

Simon Collins: 'Leaders of large organisations are like conductors of an orchestra'

Here, Simon shares his views on the value of…
Latest

Harriet Green: “Speed rather than elegance.”