If Cash is King Again, Who Comes Next?

If Cash is King Again, Who Comes Next?

Preserving cash has become the main imperative for organisations, as they recover from significant losses and disruption caused by the COVID-19 crisis. But, once financial survival has been ensured, what will leaders, board members, advisers, and investors choose to focus on? We invited some of them at our virtual Coffeehouse event to ask them: “If Cash is King Again, Who Comes Next?”

Activist investor Richard Bernstein, leader of Cordant Group Phillip Ullmann, and corporate responsibility expert John Elkington all agreed that what we need most is more sustainable organisations and systems.

“What’s happening to us now is very much akin to a heart attack. The stuff that keeps the global economy throbbing along is being squeezed down — and that causes all sorts of problems. The first thing heart attack survivors do is ask themselves: ‘What behaviours caused the issue, and what can I do to make sure it doesn’t happen again?’”

We need to look at our previous behaviours, at organisational and systemic level, and assess how they contributed to the current crisis. Beyond understanding how not to set ourselves up for the same failures, this is also an unprecedented opportunity to reposition businesses for success in the new reality.

“Of course, survival is key, but the next step is about anticipating the changing landscape. We have to think about what’s in the best interest of all stakeholders and adapt.”

For Phillip, true change starts with organisations getting behind a purpose that encourages collaboration across different sectors of the economy, for the benefit of all participants.

Defining a raison d’être beyond profits continues to be a significant struggle for many organisations, and Phillip has had his fair share of challenges over the years. Along the journey of defining a compelling mission for Cordant Group, Phillip learned the importance of sticking to a single, clear purpose.

“We ended up having five purposes and we couldn’t deal with any of them particularly robustly.”

When we asked our online audience which stakeholders they’ll prioritise in the coming period of change, nearly half (47%) put their employees at the top of their agendas, followed by customers (19%), community (16%), and shareholders (9%). Disappointingly but unsurprisingly for John, the environment was a top priority for only 7%. Surprisingly in the current landscape, however, suppliers were prioritised only by a small minority (2%). 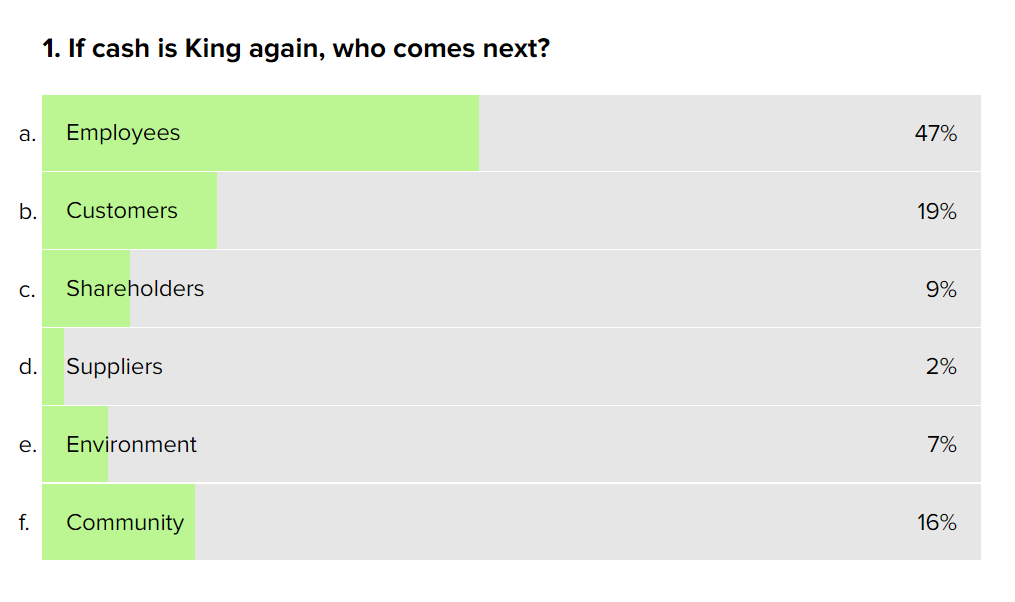 Is it time for faster moves and bolder leaders?

A lot of the work that’s been done on corporate sustainability has been incremental. We’ve politely asked organisations to be a bit nicer, a bit more transparent and responsible to the environment and society at large.

“We’ve had decades of what I would describe as a ‘change industry’. We’ve been trying to get business to do new things or do old things in new ways.”

The change agenda is now being accelerated by the disruption of the past months which has illuminated fundamental challenges. We’ve seen how lack of transparency in China contributed to the global health crisis. Issues such as tax avoidance and the wealth divide have also come under the spotlight during this painful period.

Leaders need to make faster and bolder moves to respond to this remarkable shift in gears. How boldly and quickly a leader can move, of course, depends on how their organisation is governed. Therefore, Phillip believes now is a good time to rethink how decision-making power is distributed — starting at the board level.

“The CEO has to let go. We need to create self-managing teams and shift away from autocratic decision-making by boards and leaders.”

Richard, on the other hand, believes that, while it’s important to consider ideas and views coming from all stakeholders, such a process could make organisations dangerously slower.

“Companies are not moving forward fast enough. CEOs are not making bold decisions. They are instead putting decisions through multiple committees.”

John stands where Richard and Phillip’s opinions meet. He believes we need to see bold leaders who are confident they have the backing of their boards, employees, customers, and society at large. Every new era needs new heroes, and perhaps the time has come for a hero who serves as an intermediary between all stakeholders. The answer could be in a new model of governance — one that embraces greater collaboration, not just within the organisation, but also within its industry and across its value chain.

“If people rebuild the old model as the solution for the new era, that’s a disservice to every stakeholder they are meant to be serving.”

For the full discussion, watch the session on demand below.

How do we balance between People, Planet, and Prosperity?

Solving fundamental issues such as the global climate crisis, distribution of wealth through the supply chain, and ensuring the most vulnerable are not the worst-impacted in case of a disaster requires mammoth effort.

Phillip holds the view that once an organisation has found and defined its passion, it needs to form a coalition of like-minded organisations and institutions, both in the private and public sector. Through this process, they can create an ecosystem that enables a common language and builds understanding between all stakeholders.

“We have to start speaking a language that everyone understands and that can be done through a set of standard measures across the private and the public sector.”

A conversation John had with Gail Bradbrook, the co-founder of Extinction Rebellion, inspired him to write a letter to the Times in support of Extinction Rebellion’s agenda and urging leaders to acknowledge and address the climate emergency. Signed by 23 CEOs — including former Unilever CEO Paul Polman — the letter pointed out that organisations are not built to work in the context of a developing global climate emergency, and that businesses and entire industries need to be redesigned. At the core of this attempt to find a common language between activists and industry is the idea that organisations need to become sustainable if they are to remain profitable.

We currently measure success in the language of accountancy and that, as Phillip points out, is not a language everyone is fluent in. A change of era comes with a changed set of measures for success. So, what yardsticks should we be measuring ourselves to in the future?

“At the moment the measures we use are not fit for purpose. Profit and GDP have had their time.”

Phillip advocates for a move to a new set of measures easily understood by everyone in four areas: People, Community, Environment, and Wealth and its distribution through the supply chain. Those new KPIs will change the language the organisations speak and the way they operate.

What’s the role of governance in this balancing act?

There’s more to governance than requirements and box-ticking. Governance is the force driving an organisation, and good governance should be driving the new collaborative ecosystem and enabling new conversations.

“Unless we change the way we govern large organisations, we’re not going to be able to collaborate. Governance is right at the heart of delivering purpose.”

Richard pays special attention on the role governance plays in setting organisations up for future opportunities. While there has been progress in the right direction, he believes that’s been responsive rather than a guided effort.

“Often, risk-adversity has lead organisations to be followers, rather than leaders of change. But we shouldn’t forget that risk-taking is at the crux of entrepreneurship.”

Effecting positive change is also increasingly fundamental to financial success. Today, both leaders and governance professionals are the ones in the driver’s seat.

“Suddenly, the change agenda is about the very nature of the economy we’re trying to operate in and serve.”

Where do we turn for inspiration?

The generational gap can serve as a powerful catalyst for the needed change. Our own families and children increasingly influence the decisions we make to address societal and environmental issues.

“I know of a former CFO of a major oil company who struggles to talk to his children and grandchildren about his work because they now see his company's activities as borderline criminal. This is becoming personal for a lot of people.”

One of John’s daughters spent 3 days in prison for protesting against the opening of the M77 motorway. Her boldness inspired John to take more direct action in response to the issues he’d spent his career advising boards on.

The epiphany behind Cordant Group was driven by Phillip’s family. Watching his son-in-law having to choose between a career in law and his passion for education made Phillip understand that, sometimes, systems and organisations need to be moulded around individuals — and not the other way around. The realisation that passion drives purpose made Phillip reconsider the way he did business.

Dealing with major issues such as climate change is beyond the capacity of any single human being, and beyond the lifetime of a single generation. Richard notes that, because the global climate crisis doesn’t unfold as rapidly as a viral disease, it doesn’t alert us in the same way. Many organisations see the required steps to properly, effectively, and timely address the global climate challenge as a set of sacrifices. John sees things differently: He believes that the countries and economies who get into the new green industries early on will be the winners of the future. But the transitionary stage will be painful; no question about it.

The future of capitalism is already out there. We just need to get out the bubble of our habits and see more of it. If cash is king again, whatever comes next we need to face in a  world where purpose and profit are intertwined, organisations across the private and public sector collaborate more efficiently, and we’re all lead by the vision of a better future.

Phillip Ullmann grew Cordant Group’s revenues to circa £850m in 2017. Then, he transformed the company into the UK’s largest Social Enterprise. In other businesses, he’d be called the Chair. At Cordant Group his title is Chief Energiser.

John Elkington is a world authority on corporate responsibility, a pioneer of the global sustainability movement, a bestselling author, and an advisor to numerous boards. John is the founder and Chief Pollinator of Volans, a think tank bringing innovation and sustainability together.

Richard Bernstein is the founder of activist investor Crystal Amber, which manages over £238M in assets. Richard is also the Chief Executive of the technology development capital fund Eurovestech.

The focus on transparent decision-making has…
Latest

How Do We Stop Organisations Doing Stupid Things?

Use the ace up your sleeve for an agile 2022

Learn how to write papers that drive nimble,…
Latest

Has Private Equity Lost Its Way?