Culture and The Board - Survey Results

On 7th November 2016 we hosted a panel event on organisational culture, where we sought to address the question: 'What should organisations be doing in response to the FRC's report on culture?' We asked attendees four questions and in the first of three blogs on culture we present the highlights of their thinking below.

1. What consideration did your organisation give to culture before the FRC published its report? 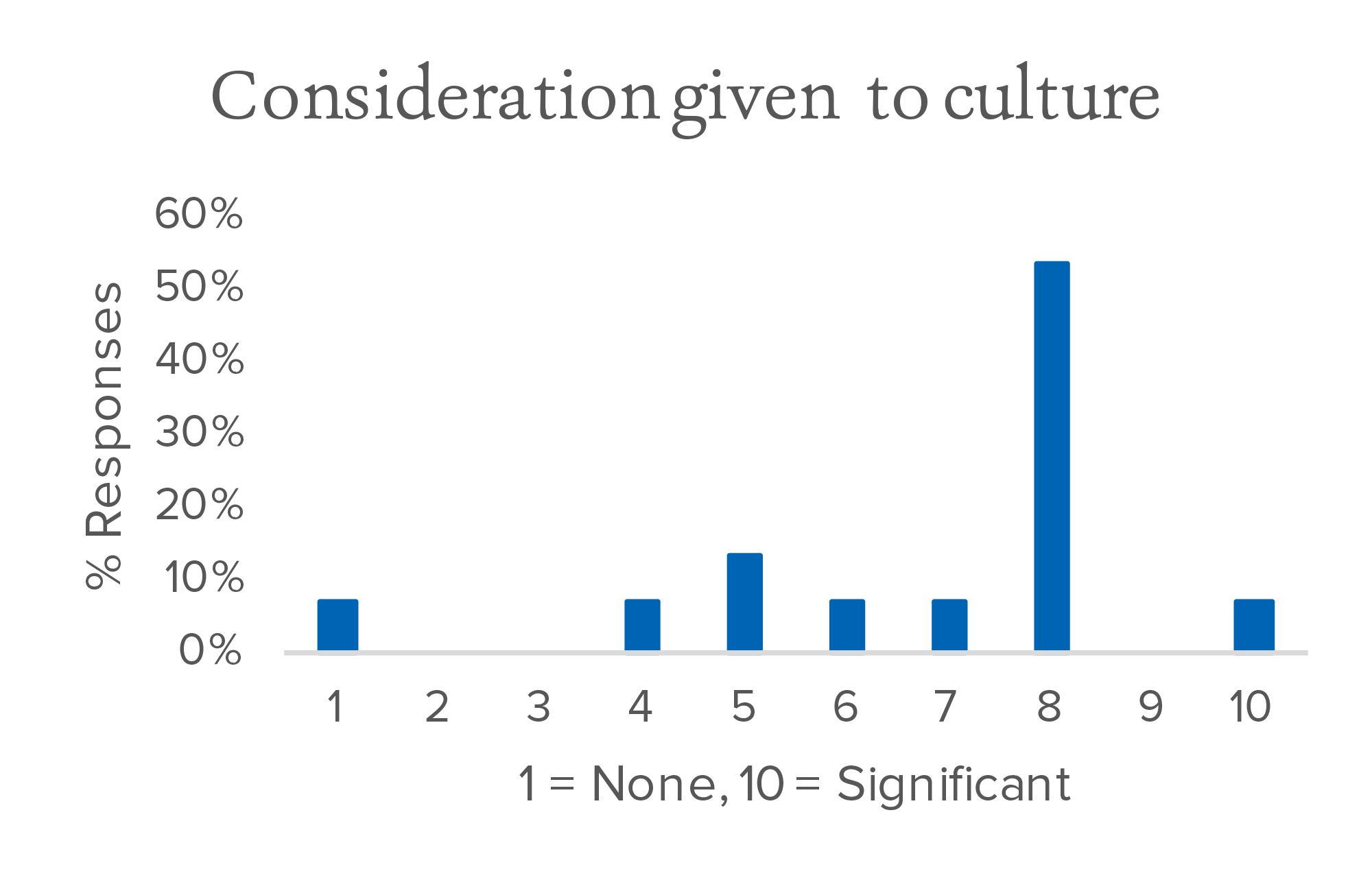 Most of our attendees felt their organisations gave significant consideration to culture even before the FRC published their report.

Is this surprising? Not really. Our respondents, pre-selected by their interest in culture, were likely to come from organisations for whom culture has been high on the agenda. But sample bias aside, our observations from the boardroom tell us that boards have spent more time on culture in the last 12 months than ever before. Indeed, this could have been in anticipation of the FRC’s interest in the subject.

2. What impact has the FRC’s report – 'Corporate Culture and the Role of Boards' – had on your organisation's approach to culture? 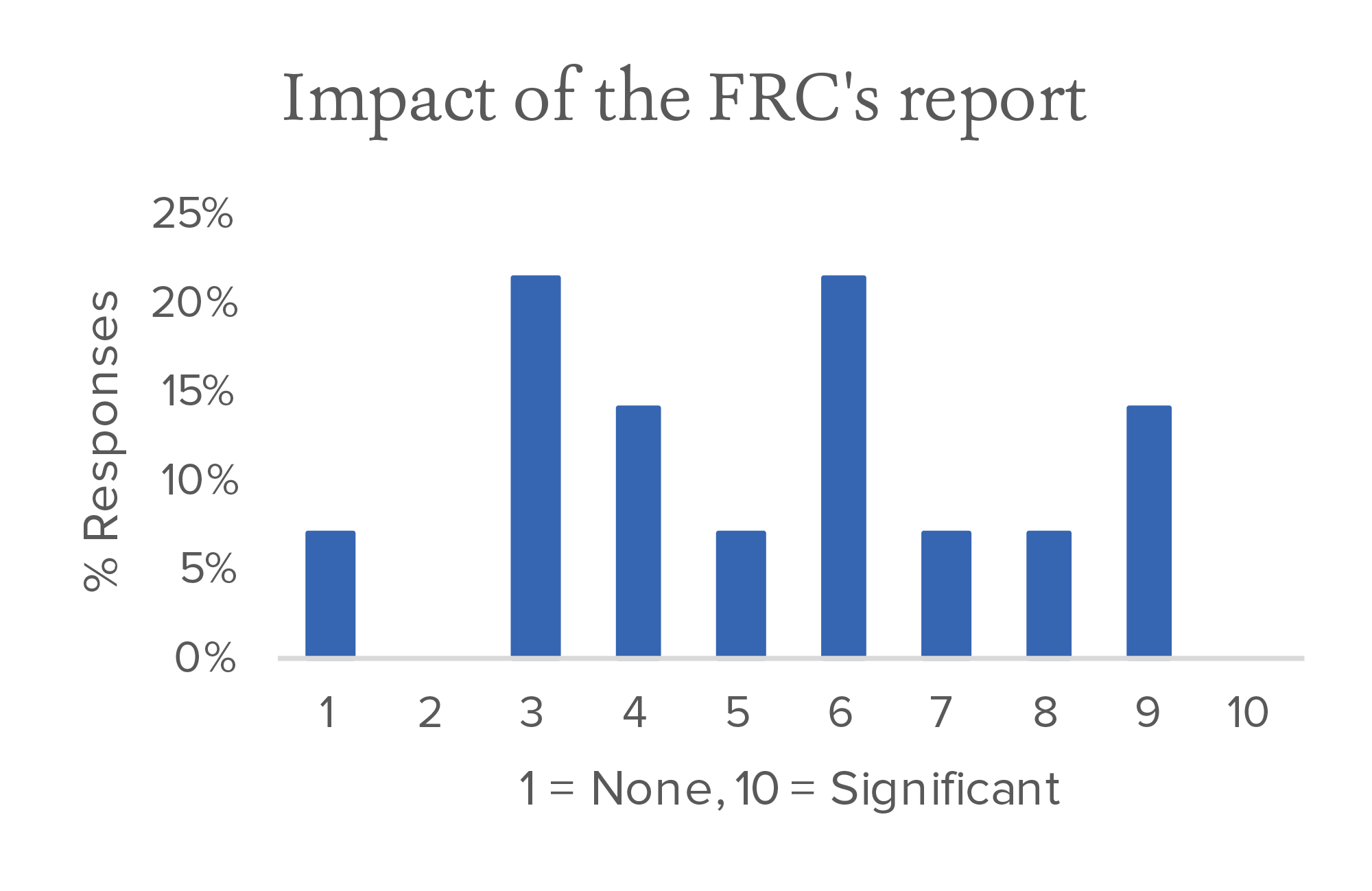 The answer here is more nuanced. The median score here is 5.5, the mean 4.9 - both suggest that the FRC’s report has had only a moderate impact on approaches to culture. But the range of responses here is wide, which suggests that there is much diversity in the response of organisations to the FRC's report.

There is another way to interpret the data – if organisations already had a high focus on culture (as the first chart suggests), their trajectory hasn't changed much in response to the FRC. This is because, in our view, the report gave no guidance or recommendations on fresh approaches to culture. This is consistent with the FRC's intent, which was to produce a report of observations; it simply held a mirror up to what industry was already doing.

3. Complete the sentence: "My advice to the FRC as it develops its guidance on culture is…"

Other respondents advised the FRC to:

4. What would you recommend your board do next about culture in your organisation?

Interestingly, the most commonly selected response to this question was that boards should 'Request a deep dive on the state of culture within the organisation'. 47% of those who responded chose this option suggesting that, while cultural change might be receiving significant attention, boards don't have a clear idea of their organisations' cultural health today.

What's next on culture?

The answer seems to be: take a close look at the culture within your organisation today. The FRC is working on developing guidance and recommendations within the context of broader corporate governance reforms that the government is undertaking. This will take time.

In the meantime, we suggest you also look at culture at the top of your organisation - at the board and at the executive level. One place to start is your board pack. This is a bellwether for culture and should help those at the top assess how it stands throughout the organisation.

Most of the coverage of the Nadhim Zahawi story…
Latest

Simon Collins: 'Leaders of large organisations are like conductors of an orchestra'

Here, Simon shares his views on the value of…
Latest

Harriet Green: “Speed rather than elegance.”